In a recent artist interview in the Textile Curator blog, the curator asked how long a piece took to complete. There was really no way to answer but the story behind Accidentals is a good case in point.

Two years ago I pinned up about 90 sheets of my silk screened plastic sheets onto a wall in my studio. It looked like a crazy quilt. I had an idea about making an oversize artist book. It was interesting but not extraordinary. I left it up there and waited until I was inspired to take a next step. It sat on the wall gestating for well over a year.

One day it occurred to me that layering the pages might be more textural. So I layered three pages on each block. That version sat there for another three months.

Then, in my quest to create more dimensionality in this piece of abstract art, I used my sewing machine to attach three of the pages together at the top and cut them into strips, so that each layer showed. I finally got excited about this direction. Even though the images were cut up, you could still read some of the text in indigenous languages and see slices of endangered birds. 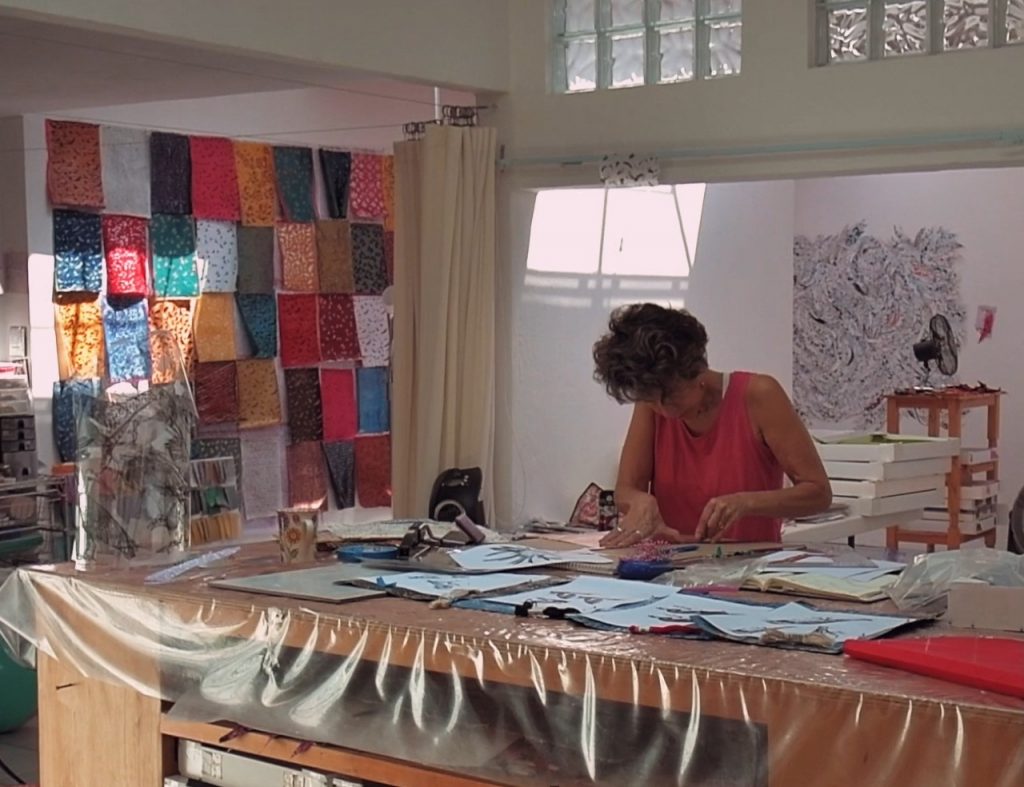 Finally, I felt the piece needed something along the top to define that edge. I borrowed a technique that I used in my earlier work and wrapped some cording with strips of the plastic sheets. For a couple of days I perseverated about whether to use 3 cords or 4. Decisions like this can really muck up the process but are important to the overall success of the piece. I decided on three plys.

I pulled all the sheets off the wall and sewed three together in varying lengths. Once they were sewn and cut into strips, I put them back up in no particular order. Randomness seemed to be the order of the day. Amazingly, they looked pretty good on the wall and I didn’t have to do much tweaking for color balance.

What I didn’t like was the horizontal flat edge of each sheet so I proceeded to trim every strip to a point. That took another month or so.

Since this piece was approaching 14 feet wide by 7.5 feet high, I decided to make it in three sections that would hang next to each other. I often think about packing and shipping in the early stages of making a piece. To ship this piece, I can lay the three sections on top of one another and roll them up.

I wrapped three lengths of the 3 ply cord for that top of each section that would fit into each other when hung. Wrapping the sections took another few days. One of the last steps was stitching the wrapped cord onto the top of the piece. This step entailed some wrestling with the piece and sewing machine, which took another couple of days.

When I put the piece up onto the wall for its final grooming before the photo shoot, I noticed some bulging and undulations that hadn’t been there before. Another accident to deal with. Actually, I liked the additional dimensionality this added to the piece.

Now for the story behind the title. The process for titling work could definitely be another blog. Since I initially envisioned this piece as an artist book, the first tentative titles had book-like allusions like Devotional and Elegy. But then I read a novel that took place in Ecuador and had a bird watching theme, Accidentals by Susan M. Gaines. I learned that Accidentals is the term for birds who appear in a habitat where they are rarely seen.

And so I chose the name Accidentals for a project whose entire process appeared accidental and random. I learned that I don’t need to micro-manage a piece. Once it’s underway, it has an inner intelligence which pushes the piece along. My job is to listen and follow the unfolding and trust the process. Since this piece was so different from my other feather pieces, I thought it was a one-off piece. But I am so entranced by the fluttering feather streamers that I want to do more of them.

I’m starting a new piece like this one but in whites. The shape will be based on a huipil, the traditional women’s garment worn in Chiapas, Mexico and Guatemala. Maybe I’ll name the new piece Devotional!